The town of Woodanilling was first gazetted in 1892, not far from the watering hole called Round Pool. Woodanilling is a Noongar Aboriginal word meaning place of little fishes. The first settlers came to the area looking for pastures on which to graze their sheep. Later, cutters poured into the district and decimated the sandalwood tree population. In 1904 the railway station was the freight leader for the region, transporting mallet bark, sandalwood, grain, wool and goods for the local shops and businesses on steam trains. In the early 1900s, 800 people lived in the Shire, and the townsite boasted general stores, a hotel, banks, a hospital, a road board office, a post office, a bakery, a blacksmith’s shop and brickworks. Today the population is on the increase again and stands at about 420 people.

Opened in 2008, the Woodanilling Heritage Walk consists of 13 panels on a short walk around the townsite. There are old black and white photos on each panel together with stories about Woodanilling’s people and places. Heritage Walk guides are available at the Shire office.

Located approximately 15km west of Woodanilling is the lovingly restored Kenmare Hall. The hall, in its heyday, held weddings and social functions and was used as a school from 1921 to 1944. The hall has been lovingly restored by a group of local volunteers and regular functions are held there, including the annual AFL Grand Final day get together and BBQ.

Take yourself on a discovery drive by following the Woodanilling Pioneer Heritage Trail. Large rocks with information plaques are dotted all over the Shire. Drive trail brochures are available from the Woodanilling General Store and the Shire office.

When you get to town, it’s probably a good idea to drop into the Woodanilling Tavern for a drink and a chat with some of the friendly locals. A few ‘ghostly’ stories haunt the history of this beautiful two-storey pub, which is more than 100 years old.

Right in the centre of town the Woodanilling General Store has everything you need from fuel to snacks, even stamps for your postcards.

The store has limited hours, so give them a call to find out opening hours.

Renowned for travelling around the Great Southern on his push-bike, the late Reverend William Kennedy instigated the building of many churches in the region including the one in the Woodanilling townsite with its colourful stained-glass windows. Stone used to build the church was taken from a hill between Woodanilling and Boyerine to the north. Building work was completed in 1908 with the help of local labour. Although the church has been decommissioned, the church can still be used with special permission from the Shire. The visitor’s book is an interesting read, and we would love you to enrich it with your comments. 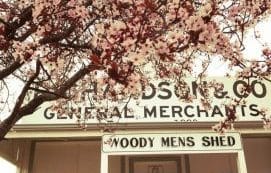 The Woodanilling Men’s Shed operates out of the recently restored Richardson & Co store. Built in 1905, the store originally catered for local farmers, sandalwood cutters and rail and road workers. The Men’s Shed have restored the building both externally and internally, and it now takes pride of place in the main street.

Opposite Centenary Park, and in the front yard of the newly established well-aged housing units “Salmon Gum Place” is a majestic old Salmon Gum standing some 34+ metres high and is estimated to be over 300 years old.

There is a designated area for RV camping, along with an RV dump point at the Woodanilling Recreation Reserve and adjoining the Woodanilling Golf Course. Potable water is available. Overnight fees apply.

This is a great place to stop for a picnic with the kids. The grassed park has a skateboard area, shaded playground equipment, free BBQ facilities, tables with benches and clean toilets. It is smoke-free and has a safety fence all around.

A tranquil picnic spot located on the Albany Highway, north of Beaufort River Roadhouse. Appreciate the natural beauty of the water surrounded by paperbark trees with great wildflowers in spring. Limited facilities are available.

You will find this salt lake about 20km west of the Woodanilling townsite. In years of good rainfall, the locals head out to Queerearrup Lake with boats, water skis and canoes. A variety of birds visit during the year including black swans. Facilities include BBQ, shaded seating and toilets. It is suitable for RV camping, which is free. Water is only suitable for washing.

A limestone pillar with stone tablets set in the pillar honouring soldiers who fought in World War I and World War II.